special waiver of premium SWP  Rider will provide for the premium on the policy to be waived during Total and Permanent Disability which renders the policyholder unable to engage in any occupation.

Disability Whether by Accident or Sickness Will be Covered.

The premium of the policy will be waived under this rider only if the disability has lasted for more than 6 months on the premium due date. 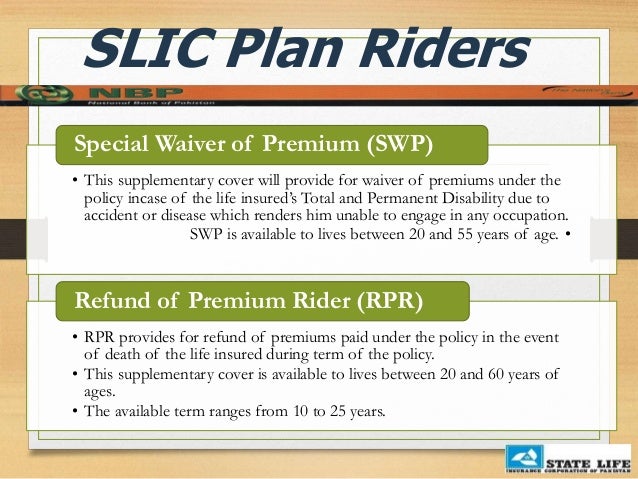 The rider will not cover any disability caused By;

4-Entering, operating or servicing, ascending or descending from or with any underwater or aerial device or conveyance except as a fare-paying passenger.

5-War  whether  declared or not,

7-Pregnancy, childbirth or any complications thereof.

Disability likely to give rise to a claim or as soon as it is reasonably possible to do so.

(c )     The policyholder must furnish satisfactory proof of disability within 7 days of the end of 6 months waiting period at his own cost. State life will have the right opportunity to examine the person of the life assured at any time, place and so often as it may require.

(d)      The insurance  under this rider will terminate on the earliest of the following dates;

1-On any policy anniversary at the prior notice of thirty days, given either by the policyholder or by state life to another party.

2-On the date the policy lapses or is forfeited surrendered, converted into a paid-up policy or terminates in any other manner,

3-When the life assured’s age nearest birthday on an anniversary of the policy reaches sixty years.

Under the advance purchase included in the agreement, the next purchase option can be used ahead of the scheduled time if the insured marries or becomes a father (or mother), so long as the option is exercised within 60 days after the marriage or birth. If there are twins, triplets etc ., the amount of the option available is the usual Basic Amount multiplied by the number born.

This supplementary Contract provides waiver ofr  of due premiums in the event of the assured’s Total and Permanent Disability caused by accident.The rate of premium for standard risk will be Re. 0.50 upto age 24,Re.0.75 for ages  25-29 and Re.1.00 for ages 30 and over per thousand of sum assured. For the purposes of this Rider sum assured per unit of Big Deal will be Rs.One lac.

1-swp may be offered to self supporting males and females in category A, who are gainfully employed .females will be charged at doubled the males rates.

2-it is available to adult lives between 20 to 55 years of age for a term that end on or before age 60 years .it is not available to minor lives.

3-maximum term is not allowed to exceed the premium paying term of the basic policy . SWP may not be attached to policies carrying W.P supplementary benefit as the latter’s benefits are already incorporated in SWP.

5- premium is charged according to health and occupation of the life proposed. Presence of extra ordinary hazard and/or physical Impairment may cause refusal of this and further increase in the premium rate .

6-the premium may be increased by the state life any time after third policy anniversary after giving at least 3 month’s notice.

8-as the war and aviation risk fall under the excluded risk of the contract,it is not available to offered it to   armed forced personnel.

concept of insurance in Islam

what is Eurasia Insurance Co?

Definition and meaning of insurance